If I ask you: What would you drink if you were in Germany? You will probably answer…

However, there are different kind of beers depending on the German region where you are. Do you already know which beer belongs to each region?

Following you can find 7 german beers I would like to recommend you. Could you guess about which regions and beers I am talking? Check if you know a lot about beer. Keep reading until the end!! Let´s begin!

1. Our first beer takes its name from its place of origin. This beer contains only a 3% of alcohol and it is usually mixed with woodruff syrup (Waldmeister) or raspberry syrup (Himbeere), which provide it with a green colour, in the first case, and a red colour, in the second case.

2. This time it can be more difficult to guess about what beer and region I am talking, however, let´s try it! 🙂

This beer tastes and looks similar to the weath beer, however, it has a peculiarity: The beer from this region is elaborated half with barley malt and half with weath malt. Formerly, the water of the river was used to elaborate this beer. That is the reason why, the beer takes its name from this river.

3. This universally recognized beer has a 4% of alcohol and its taste and look reminds us to Pilsner beer. It is composed of malt, hop, and mineral water. Hint: Its logo includes a key with a red-coloured background. 😉

4. Our next beer dates from 1390 (in the Middle Ages) and it obtains its characteristic colour due to the low fermentation of the malt during the brewing process.

5 – 6. This two beers are rivals (as well as the cities where they come from). The first one is elaborated with high fermentation yeast and dark malt. The second one is a blonde beer with a 5% alcohol and a certificate of origin. Both of them are usually served in small glasses (20 – 30cl). Tip: Both of them love Carnival 😉

7.  Finally we are going to talk about the most important beer during the Oktoberfest. With a 5% of alcohol this weath beer is mostly consumed in the region where it comes from, and it is served in one-liter glasses. Its almost transparent colour is due to the weath malt.

Was it easy to guess which beers and regions are we talking about? If so, maybe you are germanizing ;). If you still want to know if your thoughts were the right ones just scroll down and check the map 😉

Are you getting used to the German way of life? Are you including potatoes and sausages in your diet? Do you also think that the christmas markets are the place to be during winter time? If you answered yes to all these questions it is a sign of your “germanization”. Are you becoming German? Here you can find definitive 7 signs you are becoming German

1. When you
move you bring your old furniture to your new flat

In Germany it is quite usual to do not leave a single nail in your old apartment when you move to a new one. Germans
take all their furniture when they move: the kitchen, the freezer, the wash
machine… also the bulbs!

If the furniture does not fit in the new apartment they leave it in the street, so that other people can re-use it. Recycling the old-fashioned way! 🙂

2. When you
see a ray of light sun and you run outside your flat

It does not matter if it is winter or summer. Germans are crazy about the sun. If there is
a sunny day they will be on the street enjoying it. Everytime the sun shine the
streets are crowded of people having a walk or drinking a coffee in the terraces.
No one will stay at home during a sunny day.

3. When you split the bill

Zusammen oder getrennt? That is the question. If you come from the south of Europe there
is a high probability that your answer “zusammen (together)”. In some countries
it is common to invite friends for a coffee or to pay a meal.

However, a good german would have answered “getrennt (separate)”. In Germany they split everything, also the coffee bill! So, if you want to invite a friend do not be
surprised if he looks weird at you.

4. When you
remove your shoes in the entrance of your flat

It is a non-written rule. When you enter in a flat you have to remove your shoes, to
leave them at the entrance and to walk barefoot.

The main goal of this non-written rule is to avoid scattering the snow and the water of the rain around the whole flat. It is a good idea, taking into account that the average of rainy days in Germany is around 128 days per year.

Do not forget it when you visit a german friend!

5. When you like to spend a day at IKEA

Spending the day at IKEA is a german common hobby. No matter which day of the week, if
you go to IKEA it will be totally crowded. We do not know the reason why
germans love to spend their time there, but it is quite normal for them.

Did you know one of the biggest IKEA of the world is located in Germany?? Concretely in
Düsseldorf.

6. When you cannot wait to get off the public transport

Germans tend to be ready to get off the public transport before it stops. Usually they
start to queue up at the previous stop. In the subway they queue up during 2
minutes, however, it can take longer when you travel by train.

It looks like if they were always on a hurry! Can it be due to the punctuality of the Deutsche Bahn? We would like to apologize before sharing the following with you: German public transports come hardly on time! Maybe that is the reason why germans are always in a hurry?

7. When your idea of a perfect summer plan is to organize a BBQ in a park

When summer comes organizing a BBQ in the park is THE PLAN. Nothing else can make germans
happier than a good BBQ, beers and friends.

In fact, it is easy to organize one. You just need to buy some beers, food and to find a place in some random park around the city or in front of the river. Sincerely, we do not why they
love BBQ so much, is it maybe not because of the food itself but due to the weather (as we said before)?

We are almost “germanized” 🙂 After some years living here we like their way of life. An what about you, are you becoming German?

“One’s destination is never a place, but a new way of seeing things”    –    Henry Miller

Coming back to a city which we have already visited is a way to rediscover it. Getting lost among its streets once again allow us to see the place in new light and to pay attention to little things that were overlooked during our first visit.

Have you ever had the feeling of rediscovering a city?

We had that feeling during our last visits to our beloved city of Maastricht. The city surprised us in different ways every time we visited it, allowing us to discover new amazing places. Here you can see 3 places you can´t miss when you visit Maastricht:

In the year 1294 this antique church belonged to the dominicos, during the second world war this place turned into a hospital.

After it was abandoned, the town hall of Maastricht sold it to a company which built a three floors bookstore.

Walking around its hallways the visitor can find tourists taking pictures, book lovers, a cafeteria (to enjoy both, a good coffee and a good book) and renowned authors signing their last novels to their fans. Those are the main reasons why this place is considered as one of the most impressive bookstores of the world.

This huge basilica is formed by cute stained glasses and an impressive altar. However, I would like to recommend you to look down to the floor, so that you can appreciate the maze located in one wing of Saint Servatius basilica.

Here you can find a post that we wrote regarding the history of Saint Servatius labyrinth. We hope you enjoy it!

This time we would like to ask you to look down again, since you can find here a commemorative monument of the Maastricht Treaty.

It is said that the treaty took place in the city of Maastricht due to its proximity to the german and the belgium border, which provides the city with an european atmosphere hardly to find in other places of europe.

Close to the monument there is a modern bridge from where the view of the city is amazing.

Each time we visit our Dutch neighbours means a new discovery. Therefore we love traveling to the Netherlands and spending the day walking among its antique buildings.

What about you? Have you ever surprised yourself by rediscovering a city? 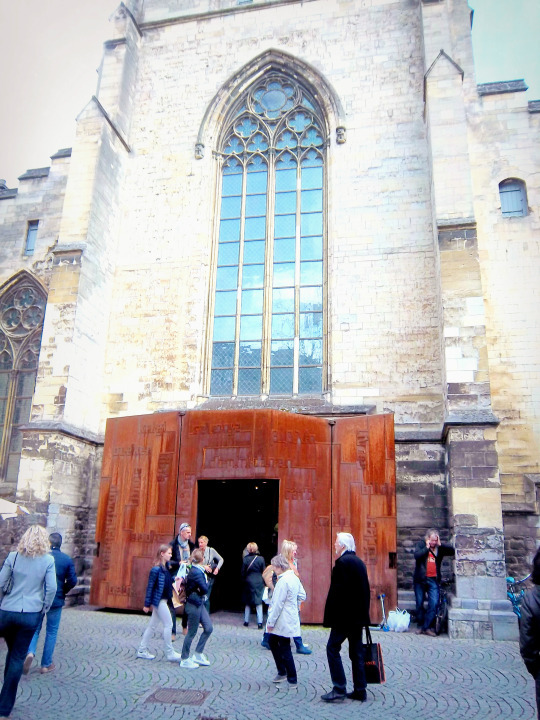