Carnival is one of the most important events in the NRW (North Rhein Westphalia) region. Probably you have already heard about the Cologne Carnival, the fifth season of the year, one of the most celebrated events in Germany. But, why do germans celebrate carnival in such an intense way? Which is the symbolism of this celebration?

To answer these questions we need to understand that Carnival has been celebrated in cities such as Cologne from time immemorial, in fact, it is difficult to find more information regarding the first time that a Carnival celebration took place.

However, during the french occupation, leaded by Napoleon, these celebrations were suspended.

In 1814, once the french troops left the city of Cologne, its citizens reestablished the carnival tradition as a part of a German revival. In 1823,  the «Festordnenedes Komitee», the predecessor of todays Festival Committee, was founded to «organize» the street festival, which was getting out of hands.

The same year, on the 10th of February 1823, took place the first «Rosenmontag» of the city of Cologne. Given its Christian roots the date of «Rosenmontag» is determined by the church calendar. It takes usually place the monday before Ash Wednesday.

Traditionally, the fifth season of the year, is declared open the 11th November at 11 minutes past 11 hour. At that time people stop working and the carnival celebration starts.

Does Carnival take place only in Cologne?

As I previously mentioned, carnival celebrations take place in the whole NRW region, due its catholic roots. Some other cities where to enjoy this festivity are Düsseldorf, Bonn, Aachen and Dortmund.

Although all of the above mentioned cities celebrate the same festivity (carnival)  each of them has its own carnival troupes, parades and celebrations.

How can I celebrate Carnival?

If you want to have some insights about carnival celebrations I recommend you to read the following posts:

Carnival vocabulary you should learn to do not miss anything

Carnival: The fifth season of the year

Do you remember I have already talked to you about the fifth season of the year? Yes, carnival is back!! Here I give you a couple of tips so you do not miss anything during the next five days.

When to start the celebration

The Thursday of carnival, also known as Weiberfastnacht, at 11.11h. The first thing you should make at exactly 11.11 is the following:

Question: Why carnival starts at 11.11h?

There are many theories about this topic. One of the most famous is related to christian symbology. According to it the number 11 is an incomplete and a sinful number. So from that moment (11.11h) until Ash Wednesday people should celebrate and party, because after Ash Wednesday day it starts Lent time. The period of Lent is the time of purification, illumination and fasting that precedes Eastern.

Question: What should I wear during the Weiberfastnacht to go to the office?

The official day of women people should go dressed up to the office!! (in most of the companies). But a good costume is not enough. Men must wear a tie so that women can cut it. I am sure that many of you are wondering; why should women cut ties? Easy. The thursday of carnival is traditionally the women´s day. Women are the leaders of the city during that day. According to a research made by the NRW history institute the tie is a status symbol of masculine power and to cut it represents the equality between both genders. Personal tip: Wear an old one during Weiberfastnacht day 😉

I think this part of the celebration is also clear in your minds: Beer and sausages.

I would recommend you to google so you can check what to sign, how, when and where. Here I show you a list of music groups who sing popular carnival songs so you can start checking them ;):

Rosenmontag parade took place for the first time in 1823. Since then, a carnival committee decides  every year which would be the carnival theme, according to that decision each troupe must build up its float and costumes for the whole carnival time. 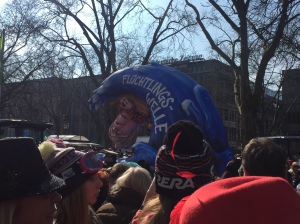 Question: When and where to enjoy the parade?

I recommend you to go to Köln, because its parade is the most famous in Germany, although each city has its own parade. Here I show you a few links where to find more information about schedules and parades. Do not forget to bring a huge bag to collect lot of candies!!