Slovenia is mostly landlocked, with the exception of a small part of land that stretches out the Adratic Sea. In this part of the country there are three small coastal towns: Koper, Izola and Piran, which are worth a visit.

Since I was not really sure what to do, my Slovenian colleagues recommended me to visit Izola and Piran, two beautiful towns with incredible views and great seafood restaurants.

Let’s start our visit to the coast of Slovenia in Piran!

Some information about Piran

The colourful town of Piran was part of the Republic of Venice until 1797, then it bounced between Austria, France and Italy until 1991, when it became part of Slovenia (What a mix of cultures! 😊).

Much of the food and architecture in Piran have Italian influences, since this village is located not far away from Trieste. In fact, until the middle of the 20th century, Italian was the official language.

Best things to do in Piran

Until the end of the 19th century Tartini Square, named after the violinist Giuseppe Tartini, was filled with water. It was not until 1895 when some platforms were added and buildings were constructed forming the square we can see today.

You can walk the medieval walls of Piran to get a unique view over the city.

These walls were built during the times when the village was part of the Republic of Venice to protect it from Turkish invasions.

The Church of St.George

To get another spectacular view of Piran and the coast, climb up the hill to visit the Church of St.George. From the yard, in a sunny day, you can even see the Italian and Croatian coastlines.

The old town is a stunning mix of cobblestone streets and colorful houses.

Wander through the old town, eat some seafood in a restaurant in front of the sea and take a walk until the beach. 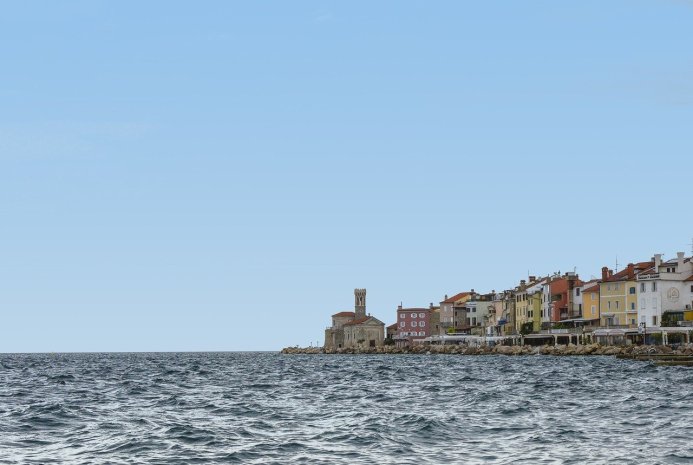 Some information about Izola

Izola is a hidden gem located between Piran and Koper. I did not know anything about this town before I visited it. In fact, I planned to visit Koper until my Slovenian colleagues stopped me and recommended me to visit Izola. And thanks God!

The town of Izola was established on a small island by refugees from Aquileia in the 7th century. Its name originates from the Italian word “Isola”, which means Island. It became part of the Republic of Venice in 1267. It was in 1954, when it was first incorporated into Slovenia.

Izola still preserves the fisherman’s traditions. The small harbor is the belly of the town and there you can find nice bars and restaurants. The point where all streets meet is consider the center of the town.

Best things to do in Izola

Church of Mary of Haljaetum

The Church of Mary of Haljaetum dates from the 11th century and it is considered the oldest building in Izola, consecrated to protect fishermen.

This ancient building is generally open during daylight hours.

Church of St. Maurus and The Bell Tower

At the top of Izola stands the Church of St. Maurus, patron saint of the town.

The legend says that when praying to the patron to save Izola people from the Genoese navy, a white dove appeared and drew the nave away from the town.

The church was originally built in 1356 and reconstructed several times in the past centuries, but the original Renaissance design and later Baroque modifications were preserved.

You will find a Gothic bell tower standing beside the church. This bell was built in 1585 and is more than 30 meters high. You can visit and climb the almost 100 steps leading to the top of it.

This palace, built in 1781, is one of the most well-preserved Late Baroque monuments in Slovenia.

Nowadays, the palace hosts the Izola Music School and it is used as a venue for wedding ceremonies.

Enjoy some biking in Parenzana Bike Trail. A trail that connects the three countries of Italy, Croatia and Slovenia.

Have you ever been to Slovenia? Is there any hidden gem that I forgot to mention?

In case you want to share your experience, feel free to leave a comment below or to contact me via social networks. I am always thrilled to read your adventures!

*Please, note that I am not an English native speaker. Therefore, you may find some spelling mistakes in this post. Feel free to let me know it and help me improve my English skills.